We present an application capable of control the azimuth, elevation, and distance of sound objects in real-time. This 3D spatialization is done by computing the interpolation of a maximum of four HRIRs, depending on the virtual location, in real-time. 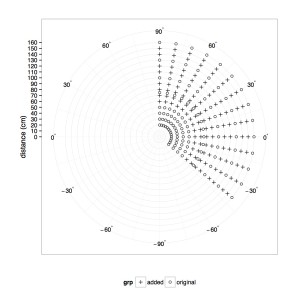 Discrete impulse response locations. Original and interpolated kernels are denoted by ◦ and ×, respectively. 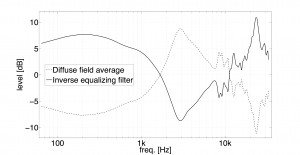 Diffuse field average and its inverse used for diffuse field equalization. Note that the original recordings are high-pass filtered with a cutoff frequency of 70 Hz.

Linear interpolations used in HRIR˜. Eight circumscribing measurements are regarded as a cube: